Each month we will feature a piece of art by randomly chosen members along with their own description of the work and what it means to them. 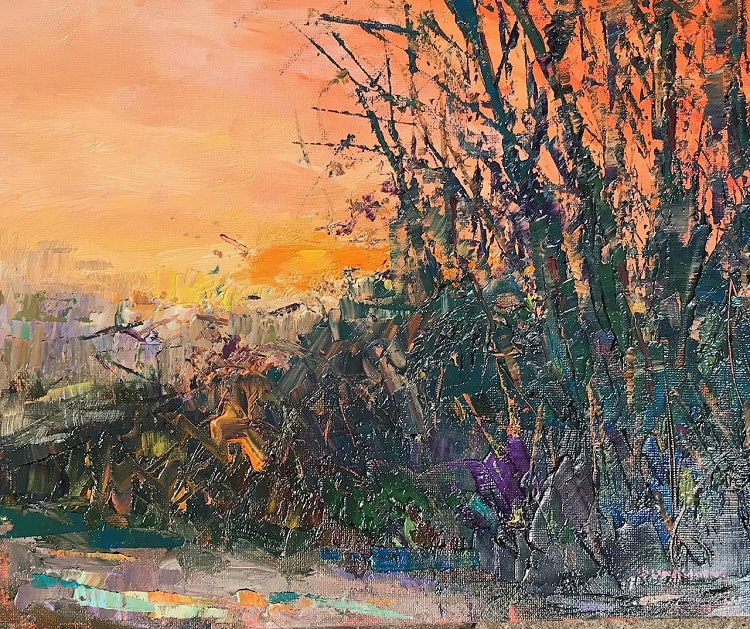 Graham Dunthorne Sun setting on Backwood Lane.
Living in Brooke I feel very privileged to be surrounded by wonderful walks. Backwood Lane is my favourite and is a five mile round trip taking in the village of Howe. Backwood Lane is a 'Roadside Nature Reserve'. I get most of my inspiration from the countryside around me and this oil painting done with a palette knife is no exception.

John Patchett Sleeping Gypsies, Pin Mill
John is full time professional artist and is a full member of The Institute of East Anglian Artists (IEA).After spending some of his time living in Adelaide, Australia, he returned to this country in 1994, settling in East Anglia where he has easy access to some of his favourite painting locations.
Besides holding 49 highly successful solo shows in Australia and England, John’s pastel paintings have been exhibited in Japan, New Zealand and with the ‘Pastel Society’, ‘The Royal Society of Marine Artists’, The East Anglian Society of Marine Artists, The Institute of East Anglian Artists. and the ‘Laing Exhibition’ at the Mall Galleries, London, where he was awarded the ‘1997 Guest’s Choice’ prize.
Over the years, John Patchett’s pastel paintings have featured in a number of articles in the “The Artist” and ‘Leisure Painter’ magazines.
His recent biography, titled “Painting from the Heart”, was written by Adrian Hill and published in hard back by Halsgrove Publishers.
Having spent many months living on the outskirts of Ipswich, I fell in love with the River Orwell and in particular the iconic location, Pin Mill. The majestic Thames Barges would sit on 'The Hard' as the tide went out leaving them high and dry, propped up against each other until the next tide. This is a scene early in the morning, as a new day broke, looking north from a position in front of the famous 'But and Oyster' pub. I have produced a number of pastel paintings of Thames Barges, but this more recent one captures the unique light in this part of East Anglia. 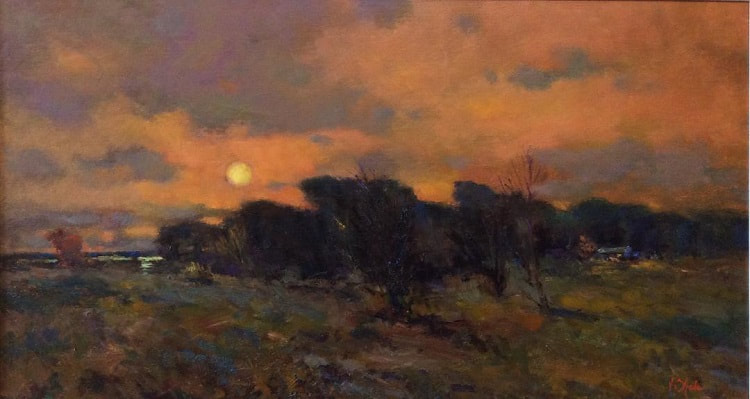 John Shave Late Evening
My early art life started in Australia where I was very fortunate to be tutored by the Artist Leonid Vasin. We became great friends over the years taking painting trips around Australia and eventually on a painting holiday to England.
I was elected a Fellow of The Royal Art Society of South Australia and have exhibited with many galleries and exhibitions in Australia. I am a member of The Wapping Group of Artists and in 2016 became the SAA Professional Artist of the Year.
My painting style would generally be classed as modern Impressionists and has had a massive input from the Australian Impressionists and in particular The Heidleberg School in Melbourne in the 1880s and especially the Artist Arthur Streeton.
I paint all subjects but have a fascination for portraiture and love landscapes, Seascape,flowers,animals and industrial. I have shown paintings with the Mall Galleries in London for many years and have more recently won several awards at The Patchings Art Festivals including The Artist Purchase Prize with the painting that I have included with this article. This is probably my favourite time to paint. I love the lowering of tonal contrast and the softening of edges and the soft, gentle mood that generally happen at this time of evening, which is the theme of this painting.
Over the years I have noticed that colour contrast in my work has become more important to me, noticeably so when I compare work from several years ago and along with the myriad of ideas I have been exploring in my mind, my partner Sue and I are now aiming to cut out a lot of the teaching we have been doing over the years to concentrate on our own work.